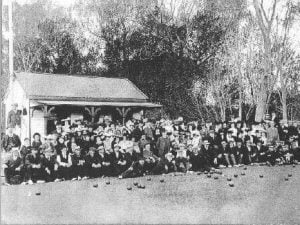 Bowls were played in Kaiapoi several years before the official formation of the club. Friends gathered on Saturday afternoons on the large lawns of Mr Edwin Parnham at Beachvale, and from 1900 with the arrival of Rev. John Holland, the Vicarage was brought into play. Mr Isaac Wilson’s lawn was also occasionally used.

The opening day of the Kaiapoi Bowling Club was held on Saturday 11 October 1902 on the Vicarage lawn and was very well attended, with a brass band playing all afternoon.

The first tournament was held in 1903 after the New Year holidays. The prize of a pair of silver mounted bowls was won by Rev. Holland and Mr Alex Purdie won the second prize.

Many of the early club members were prominent citizens of Kaiapoi, including clergymen, doctors, lawyers, schoolteachers and businessmen. At least 13 had served or became Mayors of Kaiapoi and two men had been MPs for the Kaiapoi District.

With the growth of the club, a subcommittee was formed in 1904 to investigate possible sites for a proper bowling green. The property chosen was purchased from the Church Property Trustees. Once a pavilion was erected and the greens formed, the club opened the season on 15 October 1904.

Disaster struck the bowling club in March 1910 when the pavilion was destroyed by fire. A new enlarged pavilion was built at the southern end of the green. This pavilion served the club for many years until finally being dismantled in 1986. A new pavilion was built in 1967 on the bottom green.

Following the 2010 earthquake in which the green and clubhouse were severely damaged, the decision was made to relocate to Hinemoa Park. The new Kaiapoi Riverside Bowling Club all-weather green and clubrooms were officially opened on 14 June 2014.

For a fuller history of the club, read the Kaiapoi Riverside Bowling Club Centennial booklet.